Okay, maybe not running, but I’m back to my shuffling. So WooHoo and yay me!

Admittedly it took me two days more than I was saying it would. I swore I was going to get back out there on Friday and do it, but woke up so sore that I just couldn’t physically do it, and then I just lost my nerve. I know it sounds stupid for me to be scared to go for a shuffle/jog after only a little tumble, and it’s really hard to put into words the stupid irrational fears I have in my head. But I’ll try.

Three and a bit years ago I left my house in the morning to go to work. It was my fifth day at a brand new job, a job which I loved and was so excited to be going to. I stepped out on the path and there was broken concrete under my foot, which I hadn’t really noticed before. Hadn’t noticed until it came out from under my feet and I fell down. Hard. I smashed my wrist up, both bones, right up near the top where I couldn’t just have it wrapped in a cast. No, I had to do it hard and ended up with a plate in my wrist. 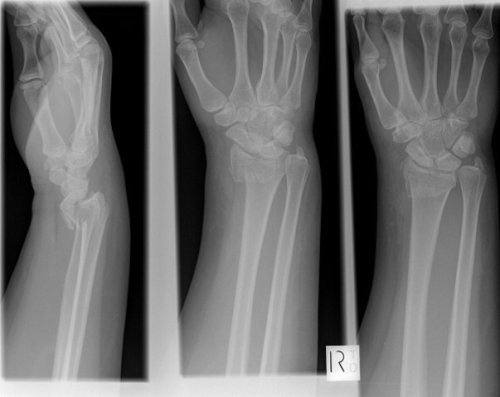 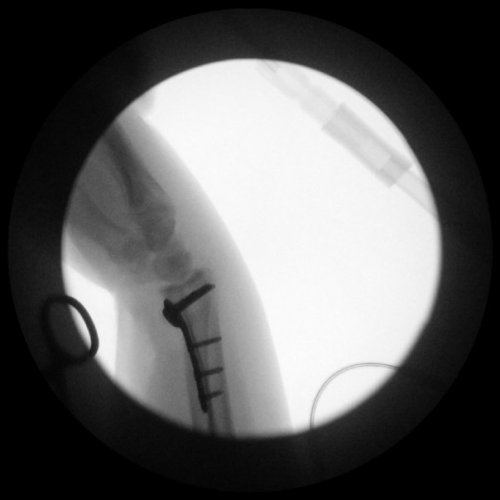 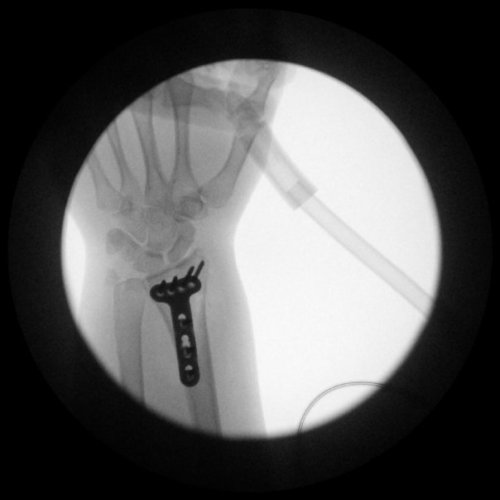 That alone was enough to scare the beejeezus out of me. I was too scared to walk alone anywhere because I didn’t want to fall over again. I went from being a girl who would wear heels everywhere, dancing for hours in stilettos, to someone who was too scared to walk with even flat shoes on, like I had on when I actually fell – that’s the weird part, I was wearing damned flat shoes when it happened. That broken wrist was just the start of the crappiness that followed though. I ended up with full blown pneumonia a week and a bit later – a result of the surgery on my wrist, and then it was almost a weekly trip back to the doctors having blood tests and ultrasounds to find out what was going on with my body after that – think liver and kidney problems. Then started the therapy to get movement back in my wrist – almost (actually sometimes moreso) as painful as breaking the wrist. Finally two months later I got back to that job I loved, but by then just getting to and from work was a struggle in itself.

But the worst, was the constant feeling of sadness and despair that came with all of this. Took me a while to really talk to the doctor about it, but eventually I was diagnosed with full blown depression – something I’d been fighting for years, but never done anything about because of the shame that I associated with it. But when I went to the doctor one day and just couldn’t actually get any words out because of the tears that were choking up my throat. I couldn’t explain what was wrong with me. I didn’t know why I wanted to cry all the time, why getting out of bed every day was a struggle. How just looking at the scar that I now had on my wrist could leave me sitting in a pile of mush for days and make me want to vomit. That was probably the best doctor visit I ever made, because to be honest, I don’t know where I’d be today if I hadn’t gone to the docs.

This is just a quick overview of the crap that happened all at the same time. I know it wasn’t all caused by the broken wrist, but every time I think of falling, I just associate it with bad things. Very bad things. It’s stupid. It’s irrational. But it’s just something that’s so hard to get over. I’m trying and the fact that I actually got back out there today and did a jog (a slow and careful jog, with Mick right by my side the whole time – even though he caved earlier than I did…) shows that I’ve come a long way, because three years ago I would have gone back inside, shut the door and not gone back outside for a week – and that’s after sitting down and bawling for a few hours. One day, I’ll be able to get back up after falling, brush it aside and just keep going. But until then I’ll just take it one day at a time and keep trying.

But the positive thing to take away from this (very maudlin – I’m sorry, it wasn’t where I was going with this post, it just kinda came out) is that…

Today was not my day!

Finally, finally after so many times trying I got up at 6.20am ready and energised from yesterday to do my shuffle in the morning. Got myself dressed and out the door, ready to do the whole route this morning before I had to go home and get ready for work.

Right, well that lasted a whole ten f*cking minutes. I was really pumping my legs and jogging (it wasn’t even shuffling today, it was proper jogging) and my back was straight, my arms were pumping, I was breathing well…

Until my shoe found a rock (or a twig, or something, I don’t even know what now) and I fell. Not on my arse, no. Flat on my face. Arms outstretched, jarred my plated wrist and smacked my teeth into my lip. All I could do was get up in masses of pain and literally scream “Why the hell does this happen to me all the bloody time?” I was so upset. I was hurt, I was angry, I was sad and glum, I was every bad emotion you could think of.

It was at that point that I turned around and went home to assess the damage I’d managed to do to myself. So my total training time was 15 minutes. Unbelievable. Thankfully I didn’t chip any teeth, but the damage to my lip was not pretty. Sliced it nice and deep on the inside, bruised it at the bottom and managed to slice the outside of my lips both top and bottom. But the worst is that the impact of smacking my hand into the ground has left me with terrible wrist pain again all day, not to mention the fact that my palm is all grazed up too. 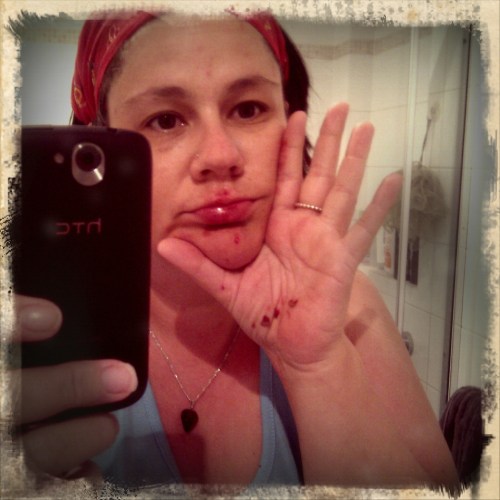 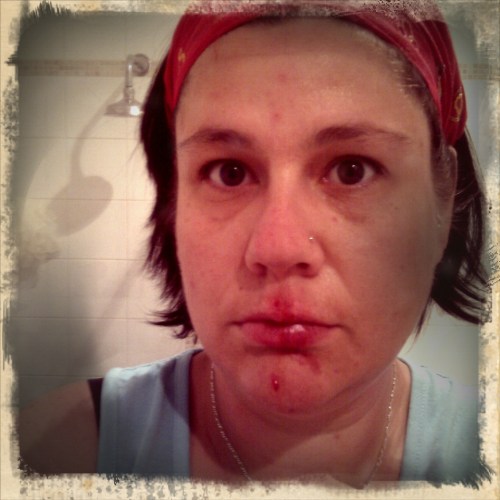 But seriously, the worst part of it all is not the physical injuries but the mental thoughts going around and around in my head now. It took me so long to work up the courage to get out there and try running, telling myself that of course I’m not going to fall over again, I’m not going to break any more bones. And now I’ve gone and done that. Fallen over and hurt myself again and it sounds stupid, but I’m so damn scared of doing it again, because I really, really, really don’t want to break any more bones. I don’t want any more plates in my body and more than anything I don’t want any more scars on my body. But that’s all arguing with the want to be able to get out there and run. At the moment though, I just don’t know which voice in my head is going to win. But I do think I need to look at my exercise plan and perhaps change it in case I don’t get back out there shuffling.

I learned a few lessons today, while I did my afternoon shuffle. Let me share with you what they were:

Let me explain that last one. Last Monday when I did my shuffle I only managed to do 4.10km and that took me 43 minutes, which gave me an average pace of 5.56km/hr. Tonight when I did my shuffle I managed to do the whole planned track of 5.37km, and at the 43 minute mark I had done 4.60km – which is 500 metres more than my time on on Monday. I know that 500 metres doesn’t sound a lot, but to me that’s a whole helluva lot. Now while I’m in my statistician mode (I can see a whole new career coming on for me here…) here’s a couple more stats for y’all. My average pace last Monday was 5.56km/hr but today I had an average pace of 6.32km/hr. Yeah baby I’m gonna kick arse soon! I’m not quite at running yet, but by George I’m definitely getting quicker.

So to make the time go quicker and to really get my pace going quicker I played a little game with myself. I got my heart rate up to 155 and kept it there for a bit, then I jogged hard until I got my HR up to 170, held it there as long as I could and then dropped back to a walk, until my HR dropped back down to 155 and then repeated the process again and again. God that was killer. Almost like interval training. So that’s how my shuffle went today.

Tomorrow the plan is to NOT turn the alarm off in the morning and get it over and done with and out of the way first thing!