When we first moved over to Port Lincoln five months ago I was talked into joining a softball team. I had my reservations because in my (nearly) 36 years I’ve never, ever, played team sports. I did calisthenics for a while when I was very young, and did jazz ballet for a couple of years in my early teens, but I’ve never joined in with sports that involved balls, I have this irrational fear of balls that come flying at me. I don’t know why, I’ve never been hit by one or anything, I think there has always just been the fear that if I got hit, it was going to hurt.

But when we moved here, I knew barely anyone, and I was talked into joining a team, with the promise that a friend was going to join with me. But then she went and had herself some baby twins, so she didn’t end up joining. But I still did. And I’ve been dreading every single game ever since. Because, quite plainly, I suck. 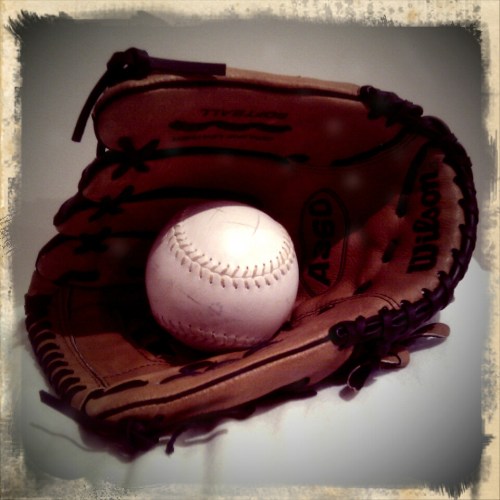 I try, I really do, but I don’t seem to be getting any better. Late last year, I finally got my first run in the game, I got so excited that when I crossed the plate I did a little jig. The little jig ended up in my taking a bit of a tumble, and because I instinctively put my arm up to protect my wrist, I came down pretty hard on my side and managed to break a rib. So now I’m even more reluctant to get out there and play.

So I had my first game back today and I will admit I was almost in tears thinking about going out there and playing. I don’t know why it freaks me out so much. I play right field (where they put the people who can’t catch – ie. Me) and I do a lot of standing around or minor shuffling from side to side to keep myself moving, while occasionally the ball comes out my way and I get it, and I know that it’s not all on me if we win or lose, but I hate letting the team down and I just feel like I keep letting them down by sucking so badly.

The weird thing is, that as much as I dread going out there and playing, by the time we are half way through I’m starting to enjoy the game. By the end of the game I’m actually enjoying it and feel a little sad that it’s over.

We only have three more games of this season left and then I have to decide whether I’m going to go back next year or not. I’ve spent so much money on gear for this game that it would be silly not to continue, but do I want to keep doing this dread thing, or will I maybe just naturally get better at the game as I get fitter, or will I always just suck at the game. Argh I just don’t know anymore.

On the plus side when I got home from softball today, before I had a chance to even think about it or change my mind I changed my top, put Hettie on and did some Zumba. I was pleasantly surprised and a bit sad to see that I don’t burn as many calories doing Zumba anymore – happy because that means I’m getting fitter, sadder because that means I have to work harder to burn calories now. And because I was in a mood, and wanted to burn those 500 calories, when Zumba finished I did a bit of Wii Fit just to bring myself up. Now I feel good!