(Image heavy post to follow)
Back in March my little baby sister called me to tell me that she was expecting her first child. I cannot tell you how excited I was. I haven’t had a baby niece or nephew for 17 years now, so another baby in the family is a fantastic thing. Straight away I thought that I would make her a quilt for the baby. Now my sister is – alternative – I always thought hippy, but that’s not what she says – she calls herself alternative. I knew that I wasn’t going to be able to do all flowers and pastel colours, but I also draw the line at doing a baby quilt in leopard print. So here started my first challenge of the process. What materials do I get for an alternative person for their baby? I don’t know that the material I chose was really alternative, but I did fall in love with every one that I chose, and for me, that was good enough. 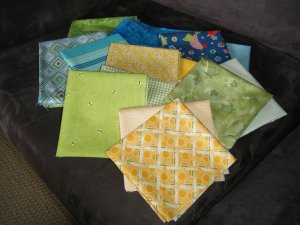 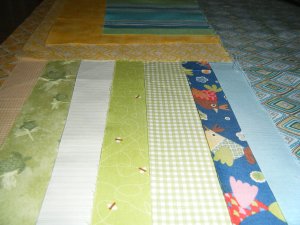 The pattern that I chose to do was the Mixtape Quilt II pattern by Elizabeth Hartman. I’m totally in love with all of the patterns that Elizabeth has and believe me I already have another couple of quilts planned – this time ones that I’m going to be keeping myself.

So I got to work, cutting out, sewing together, cutting, measuring, getting more and more excited as I saw it coming together. This is the biggest, most intricate quilt that I have done (well the second ever quilt I’ve done lol) and the closer it got to being finished, the more I wanted to keep it for myself. 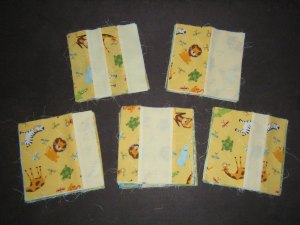 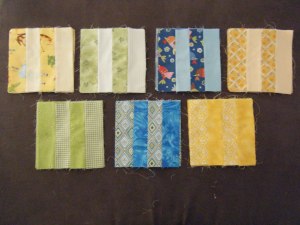 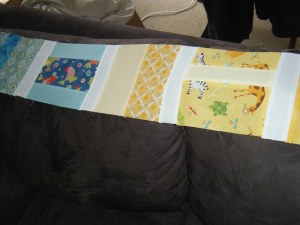 Basting the quilt turned out to be a project all of it’s own. I have never basted anything that large before and I realised just how small my living room is, when it took up all the space I had. Nearly 120 pins later, the whole thing was basted and ready to quilt. It was at the point when I picked it up to move over to the sewing machine that I realised I hadn’t quite measured correctly when sewing the backing. Turns out that the quilting was going to go horizontally over the middle of the feature row on the back. What did I learn from that? Measure twice, cut once. Hell, measure three or four times to make sure that you have got it right!!! 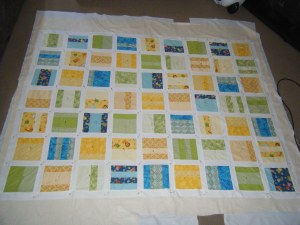 I was going to do free motion quilting over the whole quilt, I really really wanted to. But at the last minute I chickened out. I just wasn’t brave enough to do it on such a gorgeous quilt when I haven’t done enough of it to practice and get it perfect. So in the end I went for straight stitching in the sashing. Five parallel lines both horizontally and vertically to create a grid effect. I’m really happy with how it turned out except for the fact that when I was sewing a couple of the rows together they didn’t quite line up, so there is a whole row, where the quilting actually has a bit of a curve in it, but then it almost looks like it is supposed to be that way so it’s (almost) acceptable. 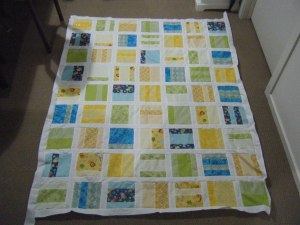 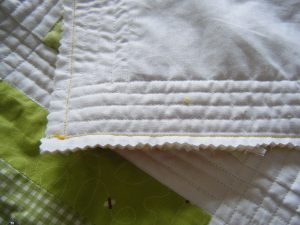 Next up came the binding. I dread this part, because this is truly the part that I suck at. Until I came across this post by Amanda Jean over at Crazy Mom Quilts. It saved my life, because I have never thought of actually sewing the binding on before trimming the quilt to size. And I certainly never thought about pinking the edges instead of using a rotary cutter. It made it all so much easier. Of course then there was the back to do. Was I going to do hand binding (I loathe hand sewing) or was I going to risk it and sew it on with the machine and hope that the everything got caught in it? So in the end I did the hand sewing and four and a half hours later, there was one hand bound quilt. I really hope my sister appreciates it, because let me tell you. Hand sewing did not do my wrist any favours. At all! 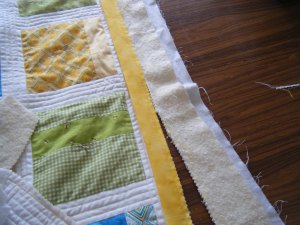 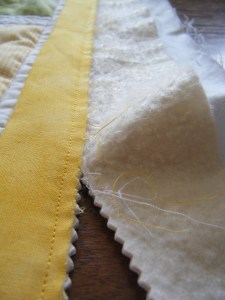 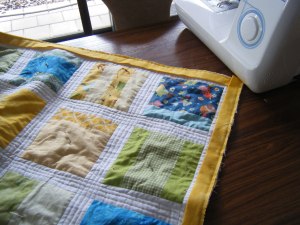 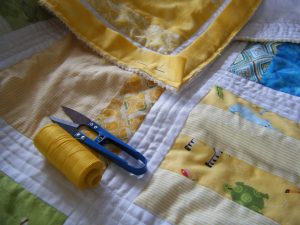 So finally the quilt is finished and I got it done, the day before my sister had her little boy. I am proud to announce that I have a new nephew named Tomahawk (I did mention my sister is alternative). He was born at 2.30pm on 26 September (which also happens to be his dad’s birthday and my other sisters wedding anniversary – 23 years for her this year!!), so a great day for his birth. I haven’t met him yet, but I’ve seen photos and he is adorable and I can’t wait for a cuddle. 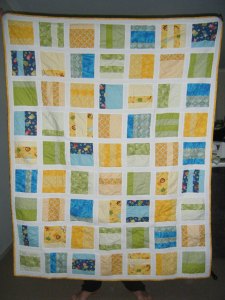 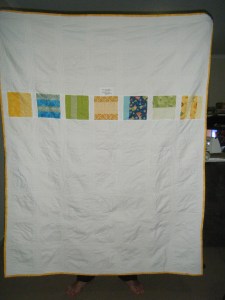 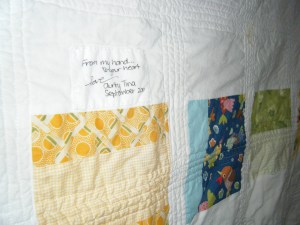 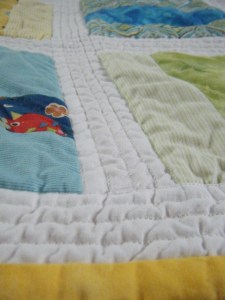 I’m so happy with the end result – I really really want to keep it for myself. I am definitely making my next quilt for myself and not as a present for anyone. I’m also going to blog about it as I go along and not leave it till the end. If you want to see more photos of the quilt you can view them all on Flickr.

So my next project (that I’m working on right now) is a new sewing table. Expect an update on that very soon.