Oh yes, it’s true everyone, today I had a burger. Once again we were out and about at lunch time, so we stopped in at a pub that we haven’t been to for a long time, and had a pub lunch, which for me consisted of Burger and chips (it also came with a beer, but I substituted the beer for a Coke Zero lol). And you know what? It was freakin awesome! Yep, it was bad food, but god did it taste good. I have to say that I’ve really enjoyed the food that we’ve been having on the 12WBT, but there is something very comforting in going back to good old pub food.

So having said how awesome it was, I should also say, I didn’t eat the whole thing. This burger was enormous! I don’t think I ate even half of it. I also only had a few sneaky chips that were served with the burger. And to be honest, I really didn’t enjoy the chips. All I could taste when I ate them was fishy oil and it made me feel sickly. But god, that burger. MMMMMM.

I’m not going to apologise. I knew what I was doing when I ate it. I’m not going to make excuses. I probably could have found something healthier to eat for lunch (though having seen the pubs lunch menu I actually doubt that to be true), I’m going to say I had a burger and be proud that I didn’t eat the whole thing, that I only had a few chips and that I’m having a very lovely super healthy soup for dinner tonight to make up for it. I still fully embrace the 12WBT challenge, but I also have a life to live, and there are going to be times I am going to want to just let loose and enjoy eating “bad” foods. Today was one of those days. It won’t be the last time either I’m sure. But as for the rest of the day – super healthy all the way 🙂 Oats for brekkie and soup for dinner, with no snacks in between (who needs snacks after this burger): 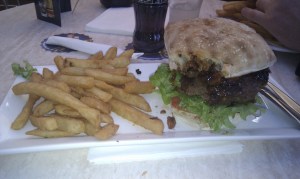