I got up this morning after my disastrous attempts yesterday to do my C25K run at the bright and early time of 6.30am. I did briefly consider ignoring the alarm and sleeping for another hour, but two things spurred me on:

So with those two things spurring me on, I got up, got dressed, got my phone hooked up – RunKeeper on, music ready and C25K app open and ready. And off I went.

I happen to live in a very gorgeously beautiful town and right next to the ocean, so my track took me along the ocean edge on a walking trail. It was all good up to the point that the trail stopped. Because when the trail stopped, I was faced with beach – sand, lots of sand. I can’t run well at the best of times, trying to run on sand was hell. But I did it and when I got to the end and looked back over where I had come it was so beautiful that I stopped to take a photo.

Now here’s a hint for everyone out there. If you use the C25K app on a HTC Desire and press stop, then go into your camera to take a photo, you may find yourself having to start all over again. Because that’s where I found myself. When I’d finished taking my photos I went to restart C25K, only to find that it had shut down and when I re-opened, it faced me with the start screen!!! No!!! I could not believe that had happened to me. (But on the plus side, take a look at the gorgeous views I had while doing my shuffle…) 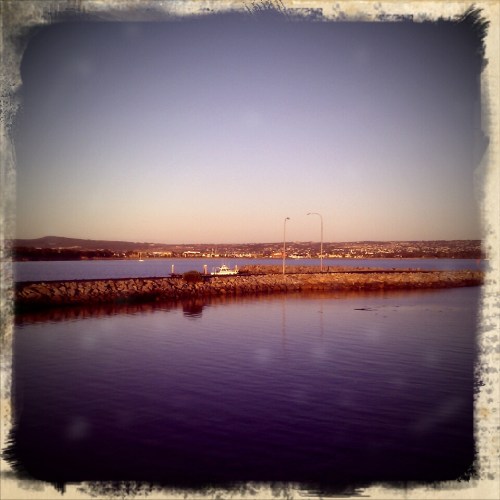 It was at that point I could have screamed (if it wasn’t for all the campervans in the area I was standing in, I was a little afraid of the people I’d wake up), so I stomped off, full of huff and fury, leaving the C25K off and trudged home.

So now I have to restart the program from the beginning, but I think I may give it another few weeks before I try again. Between Zumba last night and the shuffle this morning my knees were very tight and swollen feeling today and I think I may have overdone it just a tad. But it’s nothing that a fantastic swim this afternoon didn’t fix up.

Now, speaking of swimming. I started doing laps at the local pool about three weeks ago – going twice a week and swimming, in the beginning, for an hour – doing 40 laps, which equals 1km. And three weeks ago, it took me 58 minutes to do those 40 laps and each lap was a struggle. I couldn’t even do a whole lap of breaststroke, I had to do a bit of a paddle in between. It’s amazing how far I have come in just three weeks.

Tonight I powered through my first 14 laps in just under 15 minutes and pretty much the whole time I was doing breaststroke (well, my version of it anyway – I’m planning on taking adult lessons to learn the proper technique). It was hard and I was damn puffed, but I was amazed at just how quick I did those laps tonight and how many of them were pure breaststroke. It seems that I may just be increasing in my fitness after all. It’s very exciting and it’s definitely keeping me going.

My aim now is to see how many laps I can swim in 60 minutes, rather than how long it takes me to swim 40 laps.


Warning: count(): Parameter must be an array or an object that implements Countable in /home/currentl/public_html/wp-includes/class-wp-comment-query.php on line 405